On 3 March 2021, the Council on General Affairs and Policy (CGAP) of the HCCH witnessed Thailand become the 88th Member of the HCCH, El Salvador apply for membership, and Israel sign two HCCH Conventions.

During the ceremony, Thailand deposited its instrument of acceptance of the Statute of the HCCH, thus becoming the 88th Member of the HCCH. Thailand was represented by H.E. Ms Eksiri Pintaruchi, Ambassador to the Netherlands. Thailand has been connected to the work of the HCCH since 2002 and is currently party to the 1980 Child Abduction and the 1993 Adoption Conventions.

On the same day, El Salvador applied to become a Member of the HCCH. Following a six-month voting period and provided a majority of votes have been cast in its favour, El Salvador will be invited to become a Member by accepting the Statute of the HCCH. El Salvador was represented by H.E. Ms Carmen María Gallardo Hernández, Ambassador to the Netherlands. It is currently a Contracting Party to the 1961 Apostille Convention, the 1980 Child Abduction Convention, and the 1993 Adoption Convention. 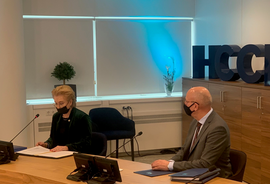 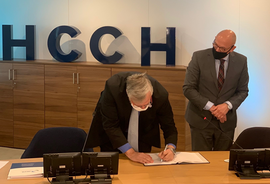