Proceedings of the Diplomatic Sessions 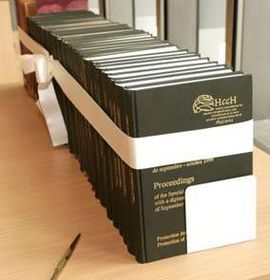 Proceedings of the HCCH

The principal published work of the HCCH is the collection of the Actes et documents / Proceedings of the HCCH. This collection gathers the transcripts of the debates as well as the negotiations and preparatory work of the Diplomatic Sessions, which result in the adoption of a new Convention. To date, this collection comprises 52 volumes, each made up of a number of bound tomes. Tome I of each volume (Miscellaneous Matters) is generally given over to the general affairs and policy of the HCCH and includes the internal rules of procedure for the sessions, the Preliminary Documents and Working Documents concerning the strategy of the Organisation, the monitoring of the HCCH Conventions and the work programme envisaged for the future. The minutes of the meetings of the Session and the Final Act adopted are also included in Tome I. The other tomes that make up each volume collect together the documents specifically relevant to the subject of the new adopted Convention, and also include its Explanatory Report. This report is in addition made available as an offprint, which can be ordered separately from the Permanent Bureau of HCCH (or from the publisher in certain cases).

Each volume is bilingual with English and French texts published side by side, except for the Proceedings of the First to the Tenth Sessions, which were published in French only, and the Proceedings of the Extraordinary Session of 1966, for which only the responses of the Governments to the questionnaires and their observations on the preliminary draft Convention were reproduced in their original language version, either French or English.