International Conference on the Legal Aspects of an E-commerce Transaction

The Conference attracted about 120 participants from 29 countries. Participants came from many European States as well as Canada, China, the Dominican Republic, Japan, Korea, Libya, Panama, Peru, Russia, Sri Lanka and the United States of America. Hans van Loon, Secretary General of the Hague Conference, and Kees van der Waaij, Chairman of ICC Netherlands and of Unilever Nederland, presented the opening speeches. They were pleased to welcome representatives of governments, intergovernmental organisations (including the United Nations Commission on International Trade Law – UNCITRAL, the World Intellectual Property Organization – WIPO, the Organization for Economic Cooperation and Development – OECD and the European Union), national Supreme Courts and international courts, private practice, business, non-governmental organisations (e.g. the Union Internationale des Huissiers de Justice and the Motion Pictures Association), academics from around the world, and the press. The Minister of Economic Affairs of the Netherlands, Laurens Jan Brinkhorst, spoke the closing address.

The audience – wide-ranging both as concerns geographical representation as well as areas of business and interest – proved that the conference concept was highly successful. The organisers had aimed to provide a forum for dialogue between legislators, those who apply the law at a professional level, business and academia. In order to achieve this aim a practical approach to the issue was chosen. The Conference focused on the “life-cycle” of an e-commerce transaction and the specific legal problems raised by the use of electronic means of communication at each stage of this life-cycle. In four half-day sessions, the Conference examined the pre-contractual phase, the conclusion of the contract, its performance, and the post-contractual phase.

For each phase, a moderator from “academia” outlined the legal issues raised by e-commerce at that particular stage. This was followed by a panel presentation of possible solutions achieved in the particular sector / area of each of the panel members, along with a general discussion.

During the session entitled “The pre-contractual phase”, issues such as advertising, competition, and the infringement of intellectual property rights on the Internet were discussed. “The contractual phase” focused on the negotiation and conclusion of the contract, its formal and substantive validity, as well as choice of court and choice of law clauses. The session on “The performance phase” covered two separate aspects: the delivery of goods or services and online performance on the one hand, and electronic payment and taxes on the other hand. During “The post-contractual phase and dispute resolution” session, issues such as data protection, confidentiality, spam, and product and service liability were discussed. In addition, presentations covering a case-study on online dispute resolution and the preliminary draft Hague Convention on Exclusive Choice of Court Clauses were also made.

For the abstracts of the speakers, click on their name in the programme; hyperlinks to their respective PowerPoint presentations are also provided.

The solutions presented covered “hard law” (international treaties, European Community instruments, national legislation) as well as “soft law” (model laws, recommendations, guidelines elaborated at the national or international governmental level or self-regulatory instruments elaborated by business organisations). The Conference thereby served as a “show-case” for legislators and international governmental and non-governmental organisations. It encouraged dialogue between legislators, academics and those subject to the laws in practice (in particular businesses). The discussions demonstrated how all these different instruments and solutions interact. Further study of the proceedings may lead to the identification of possible gaps and possibilities for co-ordination among the different actors and varying solutions. 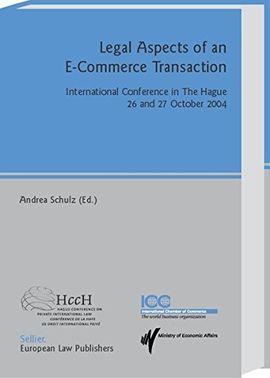 A conference book containing the full papers can be ordered at the following address: www.sellier.de.