Today, Monday 21 March 2016, Ukraine signed the Hague Convention of 30 June 2005 on Choice of Court Agreements (2005 Choice of Court Convention), as well as the Protocol of 23 November 2007 on the Law Applicable to Maintenance Obligations (2007 Child Support Protocol). Ukraine is already a Contracting State to 10 Conventions, and has been a Member of the Hague Conference since December 2003. 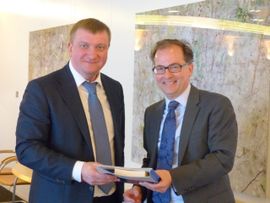