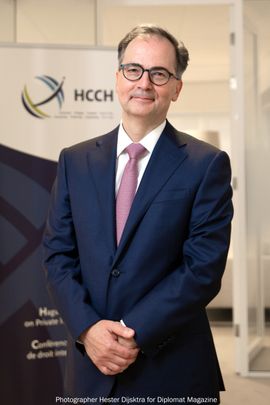 Dr Bernasconi took the office of Secretary General of the Hague Conference on Private International Law (HCCH) on 1 July 2013. In 2018, he was reappointed for a further term of five years. Dr Bernasconi had joined the Permanent Bureau (PB) in September 1997 as Secretary, became First Secretary in May 2000, and Deputy Secretary General in July 2011.

He has been actively involved in numerous normative projects and non-normative activities of the HCCH, covering the full range of its mandate, from transnational litigation and Apostille, to international family and child protection law, as well as commercial and finance law. He designed and administered the electronic Apostille Programme (e-APP). As Secretary General, he is focusing on the good governance and strategic development of the HCCH, spearheading efforts towards its universality and inclusiveness.

Before joining the Permanent Bureau, Dr Bernasconi lectured Private International Law at the University of Fribourg, worked as Legal Expert at the Swiss Institute of Comparative Law in Lausanne, and as Scientific Collaborator at the Federal Office of Justice in Switzerland. He also advised practitioners on various Private International Law matters.

He speaks French, English and German (mother tongue), and has very good passive and good active knowledge of Dutch.