Panel on the HCCH Judgments project held by the Conflict of Laws Interest Groups Section of the American Association of Law Schools, New Orleans, United States of America (4 January 2019)

On 4 January 2019, the Conflict of Laws Interest Groups Section of the American Association of Law Schools held a panel on the HCCH project on the adoption of a Convention on the Recognition and Enforcement of Foreign Judgments in Civil or Commercial Matters (Judgments Project) during the Association’s annual meeting in New Orleans. Louise Ellen Teitz (Roger Williams University, formerly First Secretary at the Permanent Bureau of the Hague Conference) gave an introduction to the draft Convention including its historical background. Donald Childress III (Pepperdine University, currently Counsellor on International Law to the Legal Counsel at the US State Department) focused especially on concerns and interests of the United States. Finally, John Coyle (University of North Carolina) spoke about the interests of businesses in the draft Convention and the likely difficulties judges may have with the text. Ralf Michaels (Duke University) chaired the panel. The debate focused on many other issues, including the changed circumstances between the first attempt at the draft Convention in the 1990s, which focused very strongly on conflicts between the United States and Europe, and the current project, which is of great interest to many countries. Another issue was the change in participants / experts, from a strong role for academics in the 20th century to the enhanced role of government representatives today. The contributions will be published in the Duke Journal of Comparative and International Law later this year, together with a paper by David Goddard, QC, Chair of the Special Commission on the Judgments Project. This issue of the Journal will be dedicated to remaining issues for the Diplomatic Session to be held in mid-2019. 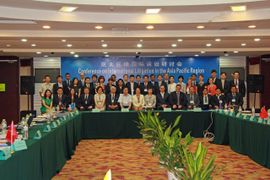 A paper written by Ms Marta Pertegás and Ms Cara North will be submitted for publication to the Journal on Private International Law in due course.

The seminar is part of a programme of events to celebrate 2013 as the "Russian-Dutch Bilateral Year" and falls under the aegis of the annual St Petersburg International Legal Forum, in which the Hague Conference has participated since its inauguration in 2011.

The Choice of Court Convention was featured at this seminar during a session dedicated to predictable and reliable dispute resolution mechanisms from the point of view of businesses.

The Convention was presented as the litigation counterpart to the 1958 New York Convention on the Recognition and Enforcement of Foreign Arbitral Awards, thus providing businesses with greater legal security when selecting a venue to decide on disputes that may arise out of their commercial activities.

The Choice of Court Convention was presented at this conference, which brought together representatives from Armenia, Azerbaijan, Bulgaria, Georgia, Kazakhstan, Moldova, Romania, Turkey, Ukraine, and Uzbekistan.

Among other things, participants acknowledged the benefits to cross-border business of respecting agreements to settle disputes before the court chosen by the parties.

For more information on the conference, including Conclusions and Recommendations, click here.